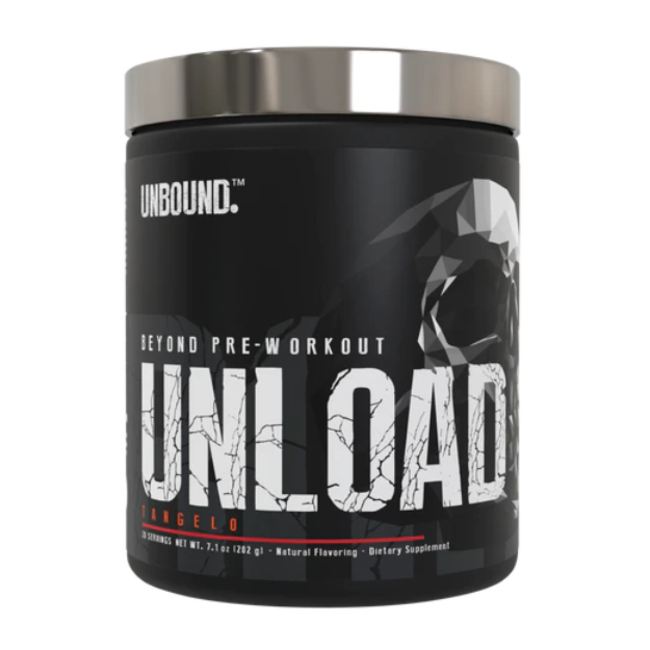 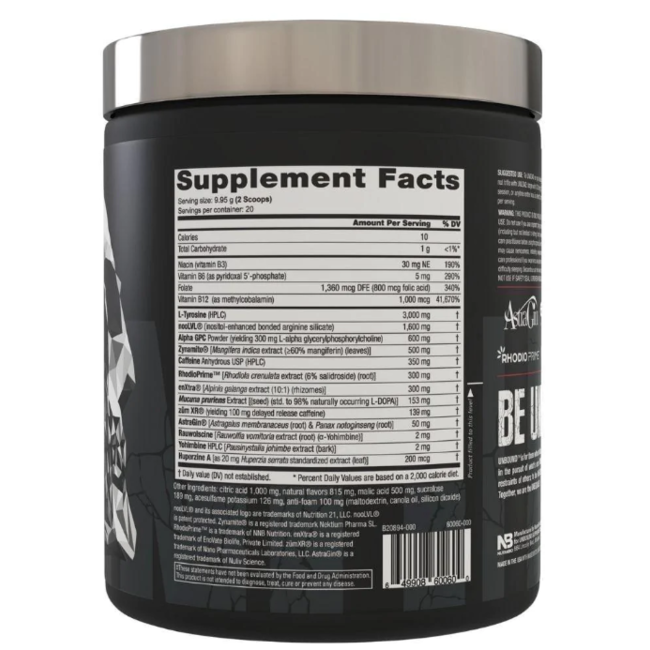 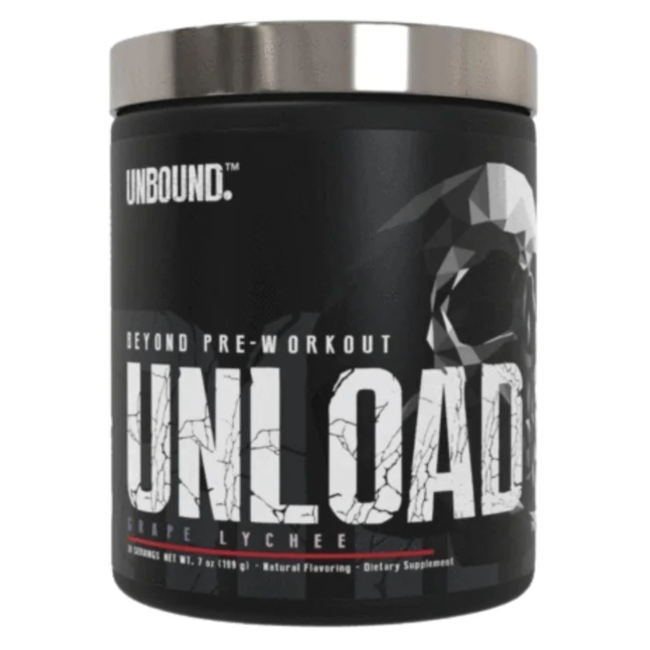 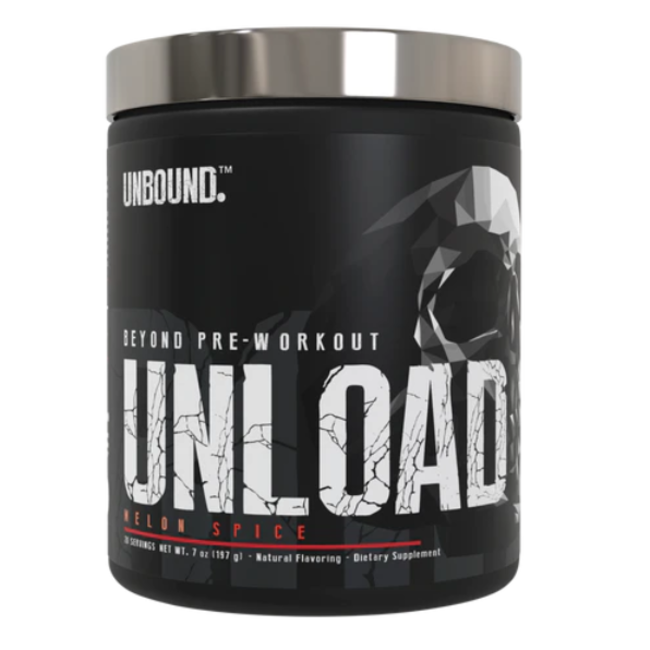 UNLOAD isn't your ordinary pre-workout supplement. When you step foot in the gym and demand your body move some heavy ass weight, you need to be dialed in. You can't be jittery. You can't feel anxious. You need unbreakable focus. They say where the mind goes, the body follows. Why would you settle for a product that is loaded with stimulants, but leaves your mind and body playing pinball while you're trying to push for a PR? UNLOAD is for those who push boundaries and the limits of what's humanly possible in the gym but need to be in complete control.

The precise formula found in UNLOAD was engineered to provide you with heightened FOCUS, DRIVE and ENERGY that lasts your entire workout and beyond. You expect the best, and that’s what you're getting. UNLOAD is a high-stimulant, high-nootropic pre-workout supplement that utilizes efficacious dosages based on science and research to help maximize your results. We refuse to compromise, and neither should you.

UNLOAD pre-workout contains a nootropic-stimulant matrix for the most demanding workouts. Consider it "powdered jet fuel"! UNLOAD and UNLEASH the power, focus, and energy for your best workout yet!

NooLVL® is a patented, non-stimulant nootropic created by the developer behind Nitrosigine®.
It is a combination of bonded arginine silicate with inositol that supports increased nitric oxide production and cerebral blood flow, and with it greater oxygen and nutrient delivery, promoting greater focus and cognitive function. One of the key components of NooLVL®, inositol, plays an important role in the production and functioning of neurotransmitters involved in learning, memory, and mood. Perhaps best of all, NooLVL is fast-acting as research indicates its energy and mood-elevating effects are noticeable after just 15 minutes, without affecting heart rate or blood pressure! *

Alpha GPC is a premium form of choline donor that is highly bioavailable and can cross the blood-brain barrier. This powerful nootropic is known to encourage the biosynthesis of acetylcholine -- the “learning neurotransmitter”, which facilitates greater concentration and focus as well as a more robust mind-muscle connection. Additional research indicates that Alpha GPC may enhance muscular power output and agility while also delaying the onset of mental fatigue .*

Zynamite® is a patent-pending proprietary Mangifera indica extract standardized to ≥ 60% mangiferin. Research indicates that Zynamite® functions as a catechol-o-methyltransferase (COMT) inhibitor that activates brain waves and increases Long-Term Potentiation (LTP) in a manner similar to caffeine. COMT is the enzyme that metabolizes neurotransmitters, including dopamine, norepinephrine (noradrenaline), and epinephrine (adrenaline). It also metabolizes levodopa (L-Dopa), the direct precursor to dopamine. By inhibiting COMT, the bioavailability of L-Dopa is increased, promoting longer-lasting dopamine and norepinephrine concentrations, supporting greater energy, mood, and motivation without the need for additional caffeine. Additional studies on Zynamite indicate it may help reduce mental and physical fatigue, increase reaction time, and boost peak power output and VO2max.*

Developed by NNB Nutrition, RhodioPrime is a high-quality form of rhodiola crenulata standardized to an industry-leading 6% salidrosides! Rhodiola has been used for centuries for its anti-stress and anti-fatigue benefits as well as its mood-enhancing properties. Salidroside is one of the key “energizing” bioactives naturally-occurring in rhodiola. Salidroside has been shown to influence several “big time” neurotransmitters, including dopamine, norepinephrine, epinephrine, and serotonin, while also inhibiting the enzyme monoamine oxidase (MOA). This ultimately supports longer lasting elevations in mood, motivation, focus, and energy while also helping to attenuate feelings of overstimulation or “crashing” as is commonly experienced with high-stim pre workout supplements. *

EnXtra® is a clinically studied and standardized Alpinia galanga rhizome extract shown to improve alertness for up to 5 hours. Alpinia galanga has a synergistic effect with caffeine as research indicates the combination of the two ingredients A galanga with caffeine impedes the caffeine crash and improves sustained attention at 3 hours. Perhaps best of all, EnXtra is able to support mental alertness without impacting sleep quality or cardiovascular parameters (heart rate, blood pressure, etc.). This makes it an ideal ingredient to give pre workout supplements more “punch” without needing to overdose caffeine or other more “aggressive” stimulants. *

Mucuna pruriens is a rich source of L-DOPA -- the biological precursor to dopamine. Dopamine levels decrease during training. Supplementing with L-Dopa supports increased dopamine levels and can help individuals to feel more motivated and energetic, allowing them to push harder and get more done in and out of the gym. *

Zum XR is a novel, patented coating technology that allows various ingredients, including caffeine, to have a longer lasting effect in the body. Combining Zum XR delayed-release caffeine with caffeine anhydrous, enXtra and Zynamite offers an unparalleled sensory experience, helping athletes of all kinds feel energized, focused, and motivated all day long! *

Tyrosine is an amino acid used in the biosynthesis of important neurotransmitters and catecholamines, including dopamine and noradrenaline. Dopamine is a neurotransmitter most commonly associated with feelings of reward. However, the neurotransmitter also plays a vital role in mood, motivation, focus, decision-making, and motor control. Intense workouts are known to deplete dopamine concentrations, and deficiencies in the powerful neurotransmitter can impact motivation, mood, cognition, and performance. Tyrosine supplementation has been shown to enhance mental and physical performance as well as reduce stress and improve cognitive flexibility. *

The foundation of all great pre workout supplements is built on a sturdy foundation of caffeine -- the most widely consumed (and researched) psychoactive compound on the planet. Caffeine is a powerful CNS stimulant that antagonizes adenosine receptors, thereby increases feelings of wakefulness and alertness, and it also stimulates release of dopamine, further increased energy, focus, motivation, and mood. Caffeine even supports greater fat oxidation (fat burning) during exercise, which may help spare glycogen stores for use later in the workout when you need to kick things up a notch at the end of your training session. In terms of performance, caffeine is noted to:

AstraGin is a novel complex of highly purified and fractionated Panax notoginseng and Astragalus membranaceus shown in 16 in-vitro and eight in-vivo studies to increase bioavailability and absorption of several key nutrients, including the uptake of numerous vitamins, minerals, phytonutrients, and amino acids (e.g. arginine 67% increase, citrulline 45% increase). AstraGin may also support better muscle recovery and growth following training as studies on ginsenosides (one of the active components in AstraGin) note that it activates the mTOR signal pathway by regulating upstream kinases in muscle cells. *