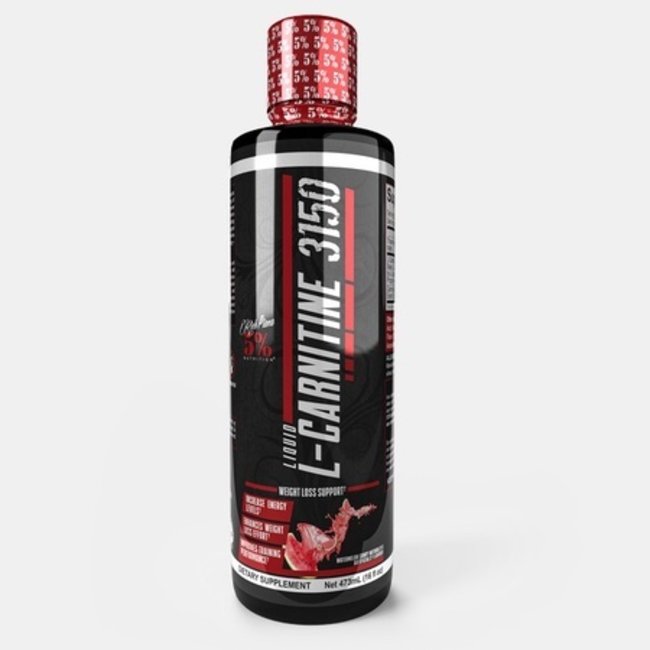 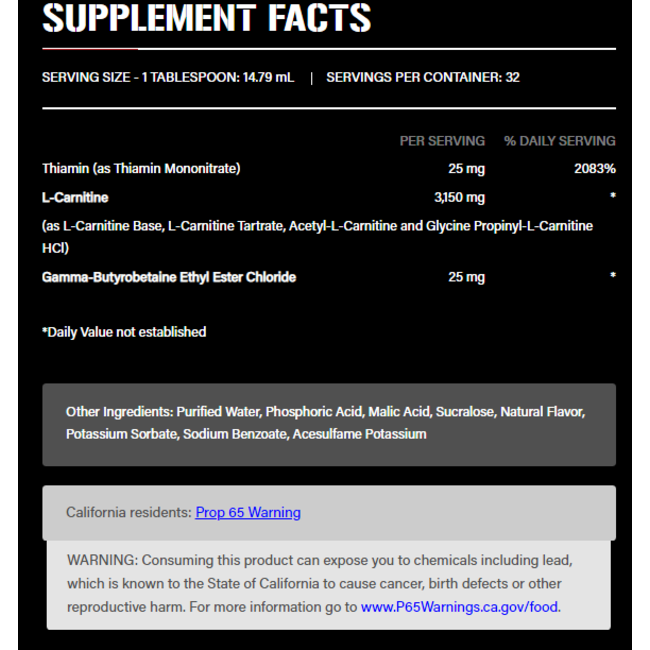 Rich Piana 5% Nutrition Liquid L-Carnitine 3150 is a mega-dose formula and combines the four most effective forms of Carnitine with the powerful "Super Carnitine” ingredient Gamma-Butyrobetaine Ethyl Ester HCl ("GBB”) to create one of highest-performing liquid L-Carnitine products on the market today.

Thiamin – 25 mg
Part of the water-soluble B-Complex family of vitamins and known as Vitamin B1, Thiamin helps the body utilize carbohydrates for energy.

Carnitine Blend – 3150 mg
This is a huge dose; no other Liquid Carnitine formula can touch it! Leave it to 5% Nutrition to create an innovative complex of four highly effective forms of Carnitine, each with their own benefits, and then tie it all together with the advanced ingredient GBB.

What is Carnitine? It’s a molecule derived from the amino acids lysine and methionine that’s naturally produced in the liver and kidneys. Typically but incorrectly classified as an amino acid, Carnitine enables the transport of fatty acids to the mitochondria to be used as energy by the body.(1)

As fatty acids are transported by Carnitine, they are converted into ATP through the process of beta-oxidation. This is an ongoing process that increases during intense exercise as fatty acids are burned for fuel. Carnitine is conditionally essential which equates to not everyone being able to reach adequate levels of the Carnitine by diet alone, thus supplementation is a good idea to support overall health.

Beyond supporting fat loss, Liquid L-Carnitine 3150 is a blend of several different Carnitines with each one providing unique benefits. Some of these benefits include increased endurance because fat is being converted into ATP energy which powers your muscles through your workouts, as well as nitric oxide stimulation, improved recovery and muscle growth support.(2,3)

L-Carnitine L-Tartrate – Also known as LCLT, this form of Carnitine is absorbed faster than other forms and supports recovery as well as muscle growth.(4) The primary way LCLT affects muscle growth is by increasing the androgen receptor that allows testosterone to work more effectively in the body which leads to improved recovery and the stimulation of lean muscle growth.(5)

Acetyl-L-Carnitine – Also known as ALCAR, this form of Carnitine has a wide range of benefits, such as supporting the metabolism of stored fat to be used in the production of ATP energy by the body. ATP is the energy your muscles use to power you through your workouts. ALCAR is also involved in the synthesis of acetylcholine which means it has cognitive benefits such as promoting a positive mood as well as supporting learning ability.(6)

Glycine Propionyl L-Carnitine – Also known as GPLC, this is a combination of Propionyl-L-Carnitine (PLC) and the amino acid Glycine. This version not only supports the production of ATP energy by enabling the transport of fatty acids to the mitochondria, it also promotes nitric oxide production for improved nutrient and oxygen delivery to your working muscles. Of course, you can expect a good pump.(7)

Gamma-Butyrobetaine Ethyl Ester HCl – Also known as GBB, this is a relatively new ingredient that’s earned the nickname "Super Carnitine” and is the molecule that your body converts into L-Carnitine when it’s producing its own Carnitine. Some studies are showing that plasma concentrations double after taking GBB which is one reason it’s earned the title "Super Carnitine”.(8)

GBB also has potent thermogenic properties, which is effective for stimulating fat loss because the core temperature of the body is increased and you end up burning more calories. Additionally, like GPLC, it also stimulates nitric oxide production.(9)

The benefits are clear. Liquid L-Carnitine 3150 not only stimulates the transport of fatty acids to be used as fuel by the body, but it also stimulates nitric oxide production which pushes the pump but also increases nutrient and oxygen delivery to your working muscles while removing waste products, thereby increasing performance and improving endurance. While this would be enough for most Carnitine products, we take it to the extreme by including LCLT to support testosterone production, and therefore recovery as well as muscle growth. Finally, the innovative GBB activates thermogenesis, which means Liquid L-Carnitine 3150 fights fat in multiple ways. This innovative formula comes in two delicious flavors: Watermelon Candy and Outrageous Orange.
L-Carnitine 3150