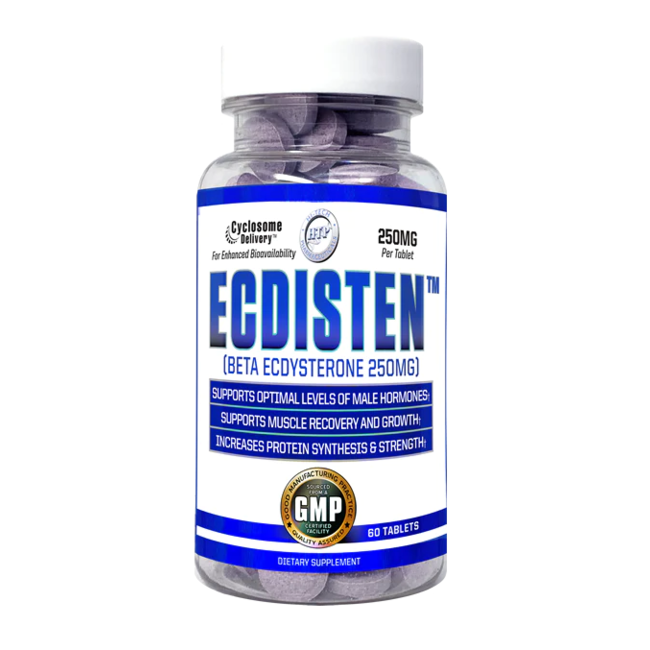 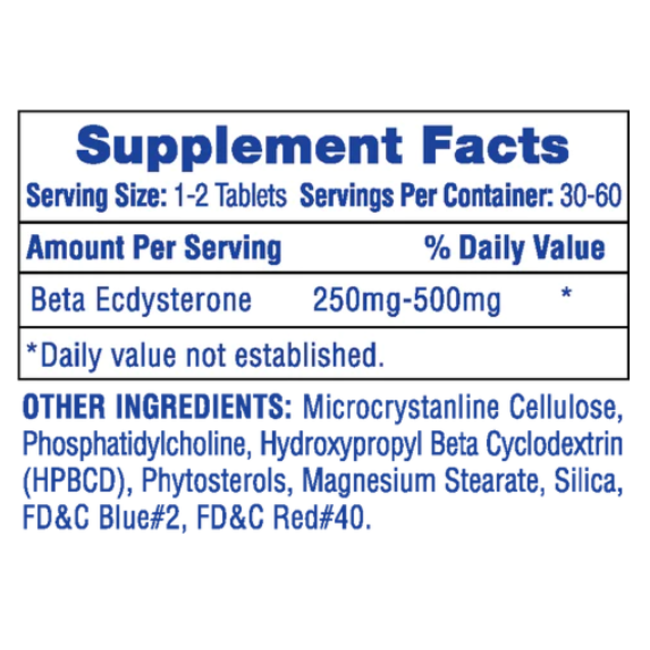 Ecdisten® is a naturally occurring compound found in plants and insects, which has recently become popular as a supplement for supporting optimal levels of male hormones and post-resistance training recovery.

Beta Ecdysterone has fairly extensive research that has been published, and so far shows exceptional benefits. One study on Beta Ecdysterone found a 20% increase in protein synthesis via stimulation of the PI3K pathway.

Another study found that after 10 weeks of Beta Ecdysterone use combined with resistance training participants gained nearly 2 kg in lean muscle mass. Ecdisten® is a cutting edge anabolic and anti-proteolytic compound, which helps keep your body in a state of anabolism instead of catabolism.

Ecdisten® is extracted from Rhaponticum carthamoides (Willd.) Iljin, syn. Leuzea carthamoides (Willd.) DC, is a large perennial herb in the compositae family. This herb is another hidden jewel. Rhaponticum carthamoides extract (RCE) has demonstrated a normalizing effect on the central nervous and cardiovascular systems. RCE improves sleep, appetite, mood, mental and physical state, and the functional ability of humans under working conditions. It is a classic adaptogen, possessing a wide spectrum of anabolic activities, acting on the contractile proteins of the skeletal muscles. It builds lean muscle, reduces body fat, improves work and/or athletic performance, improves mental acuity, and delays the effects of aging. Extracts of this potent plant have been approved by the Ministry of Public Health in the former Soviet Union over 20 years ago to be used for “raising the mental and physical working ability” as a pharmacological preparation.

The principal constituents of the whole plant are ecdysteroids (5-beta-cholest-6-on-7-ene derivatives) and flavonoids. Also polyacetylenes and triterpenes have been isolated from different parts of the plant (Girault et. al. 1984, Szendrei et. al. 1984, Varga et al. 1986 and 1990). Of the isolated compounds, only 20-hydroxyecdysone and Turkesterone are currently considered to play an important role in the action of this plant. (Syrov and Kurmukov 1976). The main flavonoides are 6-methoxy-kampferol, patuletin, isorhamnetin-glycoside and quercetin-5-glycoside. All leaf and root samples contained 20-hydroxyecdysone as a main compound of Rhaponticum carthamoides. The 20-hydroxyecdysone of the roots ranged from 0.7% to 2.0% being higher than that of the leaves. According to the quantitative and qualitative data obtained experimentally, the optimum time for root harvest of Rhaponticum carthamoides is at the end of August when the 20-hydroxyecdysone content is the highest.

In 1961 Rhaponticum carthamoides liquid extract (1:1) was officially recognized and included in the Soviet Pharmacopoeia as a natural remedy for overcoming fatigue, improving physical and mental productivity performance, and for shortening recovery time after illness. Over the years, RCE has been reported to have numerous pharmacological effects in humans (Kokoska et al 2002; Kolmakova and Kutolina 1966).

Studies conducted at the National Research Institute of Sports in Moscow, Russia have confirmed that the use of RCE by trained athletes improves endurance, speed, recovery and other physiological parameters. Based on in-depth studies, Russian scientists, researchers, and trainers recommend RCE in many areas of athletics. Since it actively influences metabolic processes RCE is effective for preventing and eliminating myocardial tension associated with exercise. Laboratory studies have shown the anabolic affects of RCE, including the capacity to increase body weight by improving the muscle-fat ratio, to increase hemoglobin and erythrocyte levels, to raise the total level of protein content in the blood, and to reduce the build-up of uric acid. The proven net result of this nutrient is that the body’s muscle building processes outpace the muscle breakdown processes, leading to greater fitness, endurance and performance (Saratikov 1949; Cherdyntsev 1970; Salnik 1970; Demin et al 1976; Syrov and Kurmokov 1976; Gerasyuta and Koval 1981a; Lupandin 1991; Seifulla et al 1993; Gadzhieva et al 1995; Logvinov and Pugachenko 2001).

During intense muscular activity, RCE maintains a stable level of glycogen and phosphates in the skeletal muscles, increasing the blood supply to the muscles and brain. It shortens the recovery period after prolonged muscular workloads, estimated by normalizing of cardiovascular parameters (Cherdyntsev 1970; Salnik 1970). Demin et al. (1976) reported a significant increase in physical performance – strength, endurance and coordination in top-level athletes after taking RCE. Seifula et al. (1993) demonstrated that the RCE in combination with carnitine increased the maximum running speed and endurance (Demin et al 1976; Seifulla et al 1993). According to V. Petkov et al. (1984) RCE considerably increases the working capacity of tired skeletal muscles and increases the concentration of glycogen, ATP and creatine phosphate (Petkov et al 1984). The intense physical activity of high-class athletes leads to an increase in blood coagulation, which causes soreness of the muscles and often results in injuries.

A comparative study was conducted using an extract blend of RCE and Eleutherococcus senticosus in combination with vitamins. A 20-day course produced a decrease in the blood clotting and blood coagulation factors induced by intensive athletic training. Treatment with this new combination adaptogenic product caused a marked reduction in the coagulation potential in athletes, accompanied by increased work capacity and recovery after intensive training (Azizov 1997). In another experiment with athletes it was found that the same “polyadaptogens” provide significant antioxidant effect (Azizov and Seifulla 1998). Studies at the Russian National Sports Research Institute revealed that RCE and several RCE based products possess a broad spectrum of anabolic actions. Leading sport pharmacologist S.N. Portugalov with a group of his associates have demonstrated that RCE possesses a significant anabolic activity and when used by top level athletes (middle and long distance runners) it can prevent them from losing lean muscle tissue during the time of intensive training enhancing their sport performance (Pourtugalov et al 1994; Gadzhieva et al 1995).

In one study a natural protein substance known to favorably influence the muscle-fat ratio, as well as work capacity among athletes, was used in combination with RCE and compared to placebo (Lupandin 1991). In the combined study it was found that taking RCE combined with additional supplemental protein was optimal to achieve the highest increase in work capacity in athletes. Of the athletes who consumed just protein, only a slight increase in muscle mass was observed. Those who used a placebo lost a slight amount of lean muscle, while those who used protein plus RCE showed a 6-7% increase in lean muscle tissue with nearly a 10% reduction in fat. No difference in hormonal parameters in those taking RCE was observed during the study period.

Introduction of ecdysterone, (0.5 mg/ 100 g), from RCE, to rats for 7 days was accompanied by accelerated body weight gain and also by a rising weight of the liver, heart, and kidneys. In these organs the total amount of protein increases (Seifulla et al 1993). Studies conducted in seven clinics in Moscow, Kiev, and Leningrad revealed that RCE significantly improves the physical and mental state of patients; increases work capacity and increases body weight during conditions of decreased nourishment caused by protein synthesis disorders. Its anabolic properties cause a normalization of body weight with no negative influences noted on the functions of either the adrenal cortex or the endocrine glands (Antoshechkin 2000). RCE specifically helps prevent the catabolic state seen with stress. Components of the plant have shown anabolic properties in clinical studies. Under conditions of daily aerobic and anaerobic training, patients who consumed RCE for three weeks lost fat and gained muscle mass (Syrov et al 1997).

Rhaponticum carthamoides considerably increases the capacity of tired skeletal muscles, and contributes to a more sparing use of carbohydrates and an enhanced new synthesis of glycogen and high-energy phosphorus compounds (Salnik 1967). When given to athletes, its extract is claimed to
increase endurance, reflexes and concentration, while the athletes grew tired later and recovered earlier (Saratikov 1966). The rhizomes and roots of Rhaponticum carthamoides are officially listed in the Russian Pharmacopoeia. The fluid extract and the crude ecdysteroid fraction obtained from the roots are used in the production of Ecdysten tablets, which are used in the official medicine in Russia. Also other preparations made from these are marketed in a number of countries.

In contrast to anabolic-androgenic steroids that exert their effects hormonally, 20-EC appears to have several different mechanisms of action. In a nutshell, they appear to act as potent “adaptogenic” compounds, enabling athletes to increase their workloads, improve recovery and stimulate gains in strength and stamina during periods of intense physical activity. In other words, they appear to promote a “super training” effect.

The most intriguing part about RCE is that despite its wide spectrum of biologic activities, the benefits seem to occur without causing androgenic (body hair, male pattern baldness, etc.) or anti-gonadotrophic (testicle-shrinking) side effects. This is not totally unexpected considering that 20-EC does not appear to bind to androgen or estrogen receptors. Therefore, men can use it without risk of developing gynecomastia (“bitch tits”), and women can apparently use it without risk of masculinization.

In conclusion, Ecdisten® is not an anabolic steriod, but old Russian animal studies showed Beta Ecdysterone to have a greater anabolic effect than many powerful anabolic agents. Comparative experimental investigation of the anabolic activity of phytoecdysteroids and steranabols. Pharmaceutical Chemistry Journal April 2000, Volume 34, Issue 4, pp 193-197. Ecdisten®’s release is great news for anyone wanting to increase lean muscle mass, decrease fat and improve performance. So bodybuilders, fitness enthusiasts, and athletes pay attention, the muscle-building breakthrough of the 21st century is here and the results being achieved by Ecdisten®  has been phenomenal. Ecdisten® works to create the “perfect” muscle-building environment in the body, among other positive effects. The perfect conditions for creating the perfect muscle building environment include maintaining a positive nitrogen balance and increasing protein synthesis along with intelligent, consistent exercise and a balanced diet rich in protein. It’s long been understood that if the body was able to maintain the perfect anabolic environment, maximum muscle growth would occur. Ecdisten® enhances the rate of protein synthesis while simultaneously showing no side effects. Now with the release of Ecdisten® these amazing results can be achieved.

Anabolic, anti-catabolic, anti-proteolytic, protein-sparing… these are terms that describe the state of protein affairs in muscle. The bodybuilding community likes to define anabolic compounds as those which increase amino acid shuttling into muscle and increase protein synthesis. Likewise, anti-catabolic, or antiproteolytic (the more specifically correct term) compounds are defined as those which decrease amino acid shuttling out of muscle (also called protein-sparing). Irrespective of whether amino acids are being gained within muscle due to an increase in the influx of amino acids and enhanced protein synthesis, or due to the conservation of amino acids already within muscle, or both, the resulting intramuscular environment is anabolic. This is a really good thing for bodybuilders.

Although most bodybuilding supplements really don’t do jack, a few bodybuilding supplements may actually help increase the uptake of amino acids into muscle, and a few other supplements may actually help to conserve amino acids already within muscle. Even better yet, there are a very few supplements that contain formulations of ingredients that do both — they are anabolic and anti-proteolytic, which means even more muscle protein. One of those very few supplements is Ecdisten® — a Hi-Tech Pharmaceuticals supplement that contains a “cutting-edge” anabolic and anti-proteolytic compound. This product is all about protein…getting it, saving it, and using it to build rock-hard muscle. The active compounds in Ecdisten® signal muscles to grab more amino acids from the bloodstream and then use them to create muscle protein at a faster rate through increased protein synthesis. The compounds in Ecdisten® also tell muscles to hang on to amino acids already within muscle by decreasing muscle-wasting activities within the muscle, creating a protein-sparing metabolism, and thus maintaining an anabolic state during times when normal protein breakdown occurs. In essence, Ecdisten® helps keep hard-earned muscle intact.