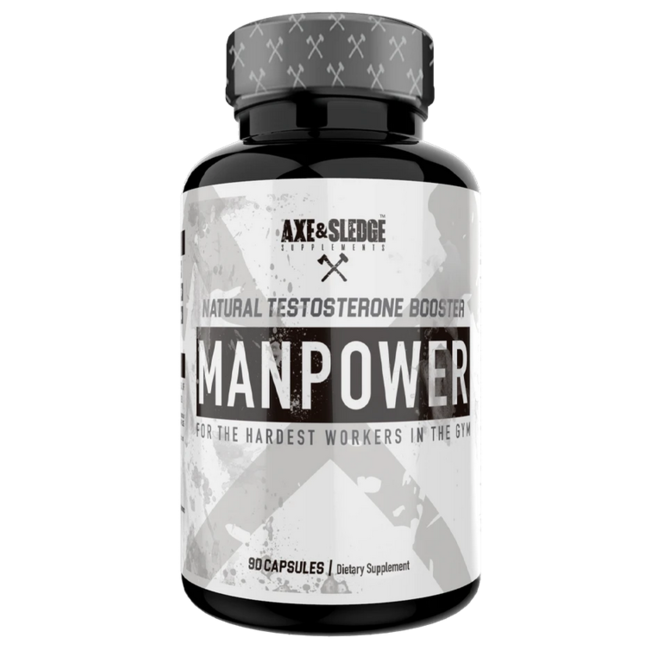 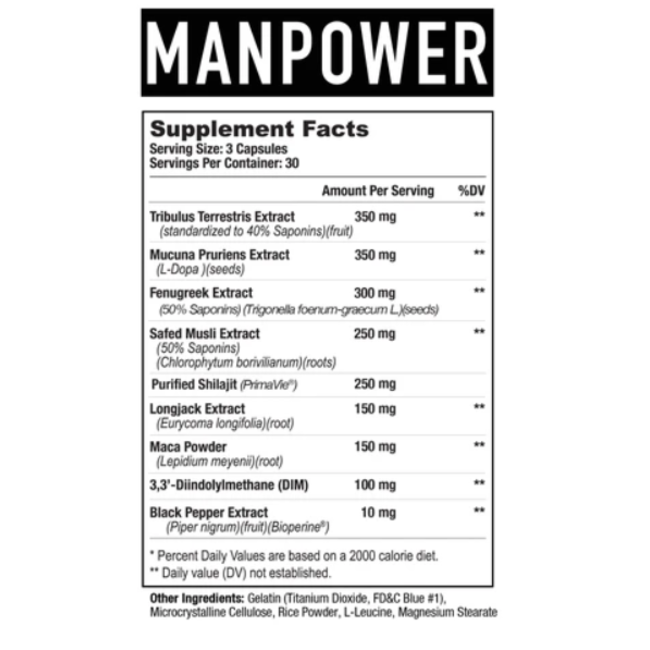 TAKE 3 CAPSULES WITH 8-10 OZ. OF WATER BEFORE YOUR FIRST MEAL OF THE DAY. TAKE AN ADDITIONAL CAPSULE 6-8 HOURS LATER AS NEEDED.

Since saponins are largely attributed to their ability to boost testosterone levels and libido, MANPOWER uses an extract that’s standardized to contain at least 40% saponins. Other beneficial properties that tribulus terrestris offers include anti-inflammatory, hepatoprotective, antidiabetic, antibacterial, and anticancer.

Mucuna pruriens extract is a bean that’s a rich source of L-dopa (also known as levodopa). As the name suggests, L-dopa is a precursor to dopamine, a neurotransmitter that contributes to well-being, feelings of pleasure, mood, motivation, movement, and memory.

Since mucuna pruriens contains a high amount of L-dopa, supplementing with it may help increase testosterone, dopamine, luteinizing hormone, norepinephrine, and epinephrine levels.

This boost in testosterone can lead to an increase in strength, muscle mass, energy, libido, body composition, and mood. Supplementing with fenugreek may also positively affect blood lipid levels and insulin sensitivity.

Safed musli extract, also known as chlorophytum borivilianum, is a herb that’s been historically used to treat sexual disorders, promote men’s health, and as an adaptogen. In other words, safed musli helps users adapt to and overcome emotional and physical stress.

Similar to fenugreek and tribulus, safed musli is also rich in saponins. Supplementing with safed musli may improve testosterone levels. Safed musli expresses other beneficial properties such as anti-stress, antioxidant, aphrodisiac, and immunomodulatory.

PrimaVie® is a high-quality, clinically studied, purified Shilajit extract that was developed by Natreon. PrimaVie® is derived from the Himalayas and contains a high amount of dibenzo-alpha-pyrones (DBPs), DBP-Chromoproteins (DCP), fulvic acid, and over 40 minerals. Shilajit has been used for centuries and is considered to be the ideal anti-aging supplement.

Longjack is commonly used as a natural alternative for testosterone replacement therapy because of its unique ability to stimulate the production of androgenic hormones, such as testosterone. Some evidence even suggests that longjack can improve exercise performance by acting as an ergogenic aid.

Through various mechanisms of action, BioPerine® significantly improves the bioavailability and absorption of several ingredients in MANPOWER. This helps enhance the effectiveness of the product so you can get the most out of it!