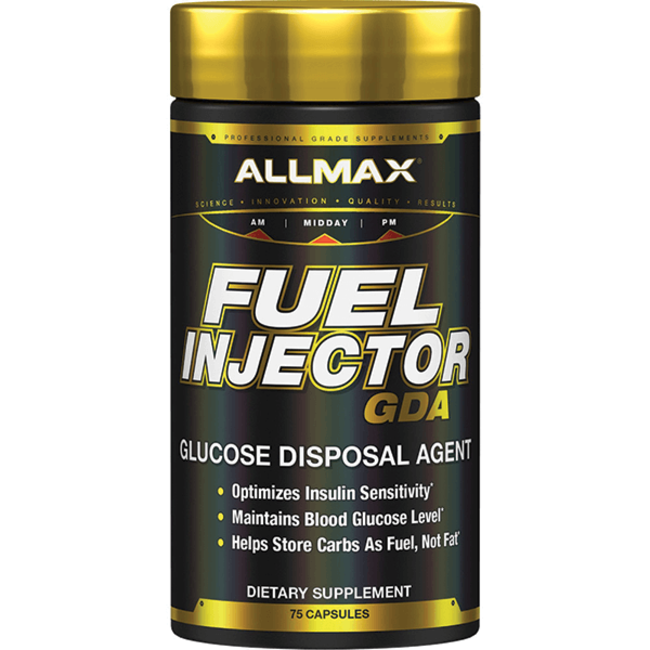 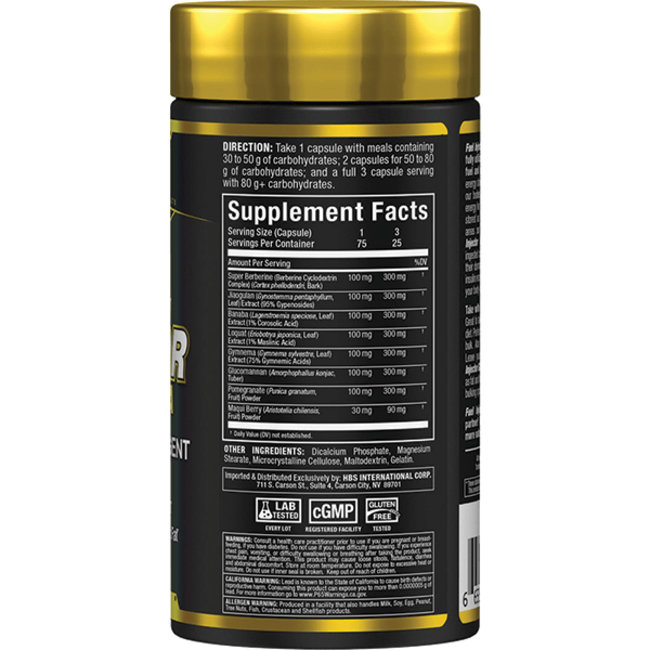 Introducing a superior way to improve training success and maximize muscle gains: The Revolutionary FUEL INJECTOR GDA (Glucose Disposal Agent). Until now, one of the biggest dilemmas facing bodybuilders has been the effective use of carbohydrates. Hard-earned gains in the gym have often been buried by unsightly body fat caused by excessive or poorly timed carbohydrate consumption. But not anymore. Introducing FUEL INJECTOR GDA.

Perfecting the balancing act of carb utilization and storage depends largely on insulin sensitivity and the effectiveness with which sugars are metabolized. With the rich assortment of ingredients found in the FUEL INJECTOR GDA formula, the body is primed to properly absorb and store carbohydrate-rich foods. The result? Excess glucose is eliminated and the glucose that does make it into circulation can be properly stored and utilized for energy purposes; not spilled over and converted to body fat. No matter how you consume your carbs, Fuel Injector puts glucose in its place. The result: more energy, greater muscle gains, less body fat and unrivalled muscle pumps!

How does FUEL INJECTOR GDA work to produce its unparalleled advantages and what can its combined ingredients do for you? Let’s take a look at what this innovative new product does and its science-supported ingredients.

Super Berberine
It’s called super for a reason. Super Berberine (Berberine Cyclodextrin) is an alkaloid extracted from various plants. It has been tested in numerous studies and found to be ultra-effective as a glucose disposal agent. Among its many benefits is its ability to decrease insulin resistance, increase glycolysis (the breakdown of sugar in cells for energy), decrease sugar production in the liver, increase beneficial gut bacteria and slow the breakdown of carbohydrates in the small intestine. 8, 21, 30 Super Berberine is so powerful that people with excessive blood sugar levels have been known to normalize them with this one compound alone. Fortunately for bodybuilders, this means not only a lower risk of metabolic disease but also less stored body fat. One 12-week study found that obese individuals who took the recommended dosage of Super Berberine three times daily lost an average of five pounds, including a 3.6% reduction in body fat! 10

Jiaogulan
Another potent natural glucose disposer featured in Fuel Injector is Jiaogulan (95% Gypenosides). Considered an “immortality” herb with powerful rejuvenating properties, Jiaogulan has been shown to address the underlying causes of diabetes: insulin resistance and poor insulin production. This impressive herb has also been shown to combat obesity without the adverse effects of various weight loss medications. 4,20 In one study, subjects who took this herb significantly decreased total abdominal fat along with body weight, body fat mass and BMI. 20

Maqui Berry
An additional ingredient in FUEL INJECTOR GDA, the potent antioxidant and inflammation-fighter Maqui Berry, also enhances the way in which carbs are used for energy, with one clinical study suggesting that Maqui Berry may help lower blood sugar in people with pre-diabetes. 1, 18 Furthermore, a large population study showed that diets high in compounds called anthocyanins (found in large numbers in Maqui Berries) were linked to a significantly reduced risk of type 2 diabetes. 32

Pomegranate
FUEL INJECTOR GDA also features a potent dose of pomegranate, which is known to some as the antidiabetic fruit. Pomegranate is not only very high in antioxidants, but has also been shown to aid blood sugar management by correcting insulin resistance to reduce circulating blood sugar levels. 2

Banaba Leaf Extract
With over 40 beneficial compounds, including corosolic acid and ellagic acid, banaba leaf extract greatly assists this process by helping to keep blood sugar levels in check – notably by shuttling glucose into muscle cells (and away from fat cells), where the sugars can be used to power intensive weight training sessions. 29 It does this by activating insulin receptors on muscle tissue, a mechanism that automatically lowers blood glucose levels. 11, 13, 24, 25, 26 One study demonstrated that just 10 mg of corosolic acid significantly lowered blood sugar levels for 1–2 hours in subjects who were tested for sugar tolerance. 6, 11

Banaba inhibits fat cell production resulting from caloric overconsumption. Important for bodybuilders who want full, round muscle bellies and ample training energy is Banaba’s ability to increase the expression and activation of GLUT-4, a transporter protein that allows glucose to be absorbed into the cells of the body. 7, 19

Gymnema Sylvestre (75% Gymnemic Shrubs)
Gymnema Sylvestre effectively soaks up excess glucose and shuttles it where it belongs. One of its primary active components, gymnemic acid, is known for suppressing cravings for sweet foods by blocking the sugar receptors on the taste buds. 15 Indeed, study subjects who received Gymnema Sylvestre were found to have less appetite for sweet foods at subsequent meals and were more likely to limit their food intake. 3

Glucomannan
A type of soluble fibre, Glucomannan (from Konjac root) is another powerful blood sugar stabilizing and weight-management agent found in FUEL INJECTOR GDA. It works by swelling up in the digestive tract and delaying stomach emptying to increase satiety (feelings of fullness), all while decreasing caloric intake at subsequent meals. 12 Like Gymnema Sylvestre, Glucomannan eliminates absorbed carbohydrates before they can be digested (it does this with fats, too), in turn, helping to create a zero-caloric environment from any excess calories consumed.

How to Stack Fuel Injector
In addition to consuming FUEL INJECTOR GDA with proven musclebuilders such as ISOFLEX and CARBION+, Fuel Injector can also be perfectly paired with superior amino acid products, such as MUSCLEAA and AMINOCORE. Stacking AMINOCORE and MUSCLEAA with FUEL INJECTOR GDA will fully maximize muscle protein synthesis, optimizing the many benefits of FUEL INJECTOR GDA. 41, 42, 43 Including this innovative new product in your training regimen will help you achieve bigger pumps, a leaner physique and natural, all-day energy.

The Fuel Injector Difference
While there are many glucose disposal agent products on the market, FUEL INJECTOR GDA is the only one scientifically proven to achieve results. Today, many companies tout compounds such as chromium, and metformin as being effective glucose disposal agents. However, FUEL INJECTOR GDA features none of these ingredients for the simple reason that they don’t work. 33, 34, 35, 36, 37, 38, 39 In fact, many of these substances may actually lead to fewer muscle gains. Why? Because some have been shown to down-regulate mTOR, the master regulator in protein synthesis.