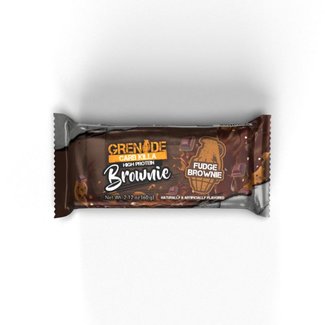 The Grenade® story is one of roll-your-sleeves-up hard work and a commitment to doing things better. Founded in 2009, our mission was simple. As sports supplement distributors we'd grown tired of selling a bunch of stuff that looked and sounded the same. So we set about creating products that people would actively seek out and remember.

Our first attempt at a weight loss formula was so effective a friend described the results as explosive, ‘like a grenade’. That product became Thermo Detonator® and Grenade® became the name we were looking for. Over the following years our team grew alongside a product family bursting with personality (and great-tasting, high-quality ingredients).

Today, Grenade® continues to pride itself on making each product and formulation as unique as possible. Products that exceed label claims and go beyond the seen-it-all-before sports nutrition stereotypes. It’s a commitment that’s seen Grenade® named as one of the UK’s fastest growing companies, as well as being featured in The Sunday Times’ Fast Track Top 100 in 2014, 2015, 2016 and 2017.

We are just as passionate and hands on as we were on day one. Be that new product development, trademarking, global marketing or looking after the logistics of having customers in over 80 countries, life’s never dull at Grenade®. That simple mission has now grown into establishing Grenade® as a global lifestyle brand. One that represents life athletes the world over.

With Grenade® on your side, whatever your goal, YOU GOT THIS.

‘At Grenade® we want to inspire people to get more out of life, whatever their fitness goals’  Alan and Juliet Barratt - Grenade® Founders